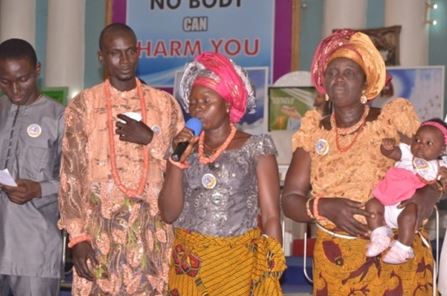 I am a member of The Redeemed Christian Church of God. My existence on earth is by the mercy of God through the prayer of His servant, Saint Dikeji MiyeriJesu, The Bishop of the whole world. My ordeal began on the 10th of March, 2014. At about 2 O’clock in the night, on this very said date, carrying a pregnancy already due for delivery, my body condition abruptly changed. For three times, I visited the toilet, passing out bloody faeces. Soon, labour pain set in and immediately I was delivered of my baby girl, I began to feel an excruciating pain on top of the stomach. An attempt to subside the pain with an injection given by a Mid-wife further aggravated the issue. At this point, I became unconscious with the whole of my body jerking and finally fell into coma despite all effort to revive me. While in this state, series of tests, diagnosis and treatments were carried out but all to no avail. At a stage, my body became swollen like a balloon. In fact, it was beyond the intervention of medical experts. Seeing the seriousness of the condition, my mother who is a member of God’s Grace Ministry Inc. quickly came to The Bishop of the whole world and intimated him with the forgoing and immediately the man of God blessed a can of water, giving an injunction in the name of the great healer, Jesus Christ that I should come back to life after application and come before the congregation of God’s people with my baby to share the testimony. Accordingly, the water was being applied on my body. Precisely on the 20th of March, 2014, during the foundation stone laying ceremony of the Saint Dikeji MiyeriJesu Int’l School at Ovwian, The Bishop of the whole world was ministering in an unusual dimension after God brought him from death back to life. During this period, my sister’s husband was present at the occasion. When he saw The Bishop vigorously alive and was praying to God to bring back to life any dead situation in the life of the people just as God has brought him back to life, he (my sister’s husband) then called the wife, my sister who was with me at the hospital and she placed the handset on my ear and kept on screaming, “Amen!” to the prayers of Jesus’ Holiness in my behalf since I was in coma. After The Bishop’s prayers, the miracle took place. By divine connection, that same power that brought The Bishop of the whole world back to life flowed into my dead body. Because darkness cannot stand light when it shows up, I suddenly regained consciousness. I mean, according to the prayers of The Bishop of the whole world, my dead body received life automatically after more than two weeks of being dead. On waking up, I was told that I had been dead for more than two weeks. I give God all the glory who has done this great miracle in my life through the prayers of His son, Saint Dikeji MiyeriJesu, The Bishop of the whole world. Just as he prayed, today I am alive as well as my baby, testifying to the honour of the Almighty. Praise God!!!