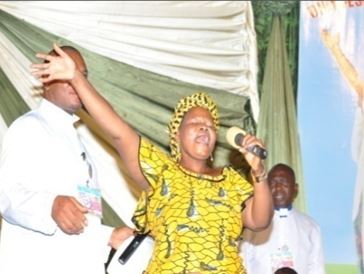 HEALED OF OVER 10 YEARS HEART DISEASE

By the power of the Holy Spirit, she was healed after the prayer of God’s servant, Saint Dikeji Daniel MiyeriJesu of a chronic heart disease which she suffered for over ten years. Hear her as she joyfully testifies, I am a member of Church of Christ at Okada and for over ten years, a very serious heart pain would not give me rest. In addition, I did receive demonic attacks after which I would start fainting and to aggravate issues, my eyes developed problem. I was in hell indeed. The numbers of hospital I visited in a bid to get solution are without number. Talking about witch-doctors and spiritual houses, I was a major customer. Prayers and several sacrifices were offered but none of these could give me help. However, my whole world was turned around for better after I encountered The Bishop of the whole world. How did it happen? I will tell you. With the help of a Catechist, I learnt of the Edo crusade and on 4th October, 2013, and I went. While praying, The Bishop of the whole world ordered, “Touch any part of your body where you feel pain” In obedience, I touched my heart and eyes. Guess what happened thereafter; you want to hear it? I received an immediate deliverance from all the troubles that Satan had inflicted on me which lasted for over ten years. The heart pain disappeared and my eyes were restored to normalcy. Praise God!