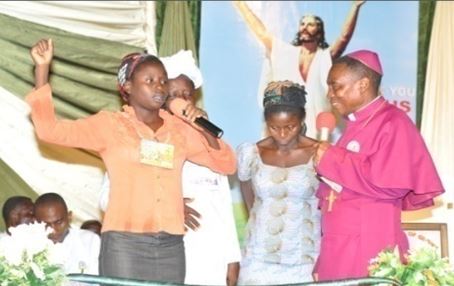 HEALED OF KIDNEY AND LIVER DISEASES

I am a member of Winners in Benin City. For over two months I was totally down with kidney and liver problem. It was so serious that I coughed blood and at the same time blood was flowing from my nostrils and in addition, my stomach became swollen. In three different hospitals, doctors tried their best but no remedy. From there I was referred to the University of Benin Teaching Hospital (UBTH), where I spent two weeks but still, there was no improvement. On 4th of October, 2013, while still in UBTH, the doctor called my mum requesting her to transfer me to a private hospital for blood transfusion. Coincidentally, it was the day-one of the Edo 4 days’ miracle crusade in Benin City. As God does His things, just at the point of being transferred to a private hospital, my mum’s sister who is a member of God’s Grace Ministry phoned her to bring me to the crusade instead of taking me to another hospital and she really did. In the arena, I was restless, unable to stand and breathe well. In fact I was giving up the ghost. Soon, I was carried to The Bishop of the whole world, Jesus’ Doctor, Saint Dikeji Daniel MiyeriJesu and after he was told my ordeal, he prayed for me and pronounced the power of creativity on me. Beloved, after the prayer, I got revived. The following morning, my kidney and liver were replaced with new ones as declared by the servant of the Most High God. I never cough blood again; blood flow from my nostrils stopped and my swollen stomach became normal. I received new strength such that walking is no more a problem. In fact I’m totally healed. PRAISE THE GOD OF THE BISHOP OF THE WHOLE WORLD!!!